His Eminence, Cormac Cardinal Murphy-O’Connor, 10th Archbishop of Westminster died today in the UK after a battle with cancer. He was 85. 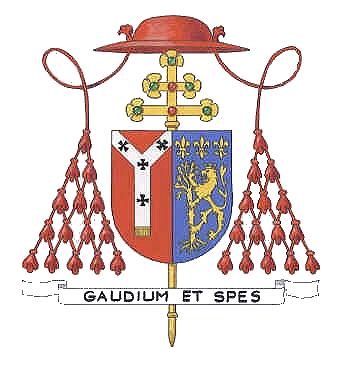 He became the 10th Archbishop of Westminster in March 2000 and “de facto” the leader of the Roman Catholic Church in England and Wales. Cardinal Murphy-O’Connor retired from the role in 2009 and was the first archbishop to do so. Born on 24 August 1932 in Reading, Berkshire, Cardinal Murphy-O’Connor was one of six children. Two of his brothers became priests while another played rugby for Ireland. He was ordained priest in Rome in October 1956 and was made Cardinal-Priest in the title of Santa Maria Sopra Minerva in 2001 by Pope John Paul II.

His coat of arms (above) was originally designed by the late Bruno Heim when Murphy-O’Connor was named Bishop of Arundel & Brighton in 1977. Later they were impaled with a modified version of the arms of the See of Westminster as recorded at HM College of Arms in London.

May he rest in peace.