On Tuesday, May 3, 2016 the Most Reverend James F. Checchio, a priest of the diocese of Camden, NJ and most recently until February of this year the Rector of the Pontifical North American College in Rome, will be ordained a bishop in the Church and installed as the fifth bishop of the diocese of Metuchen, NJ, the diocese in which I serve.

His newly adopted coat of arms is depicted, as is the usual custom in the United States for diocesan bishops, impaled with the arms of the diocese. The diocesan arms were designed in 1981 when the diocese was established and modified in 1998. The four quadrants, depicted in silver and gold, the colors of the flag of the Vatican City-State, represent the four counties of the diocese: Middlesex, Somerset, Hunterdon and Warren. The moline cross overall is taken from the arms of Trenton from which the diocese was separated in 1981. In the Trenton arms the cross is gold on a blue field. Originally, it was depicted in the Metuchen arms as black but that was changed in 1998. The red tongue of fire in the upper left alludes to both the Holy Spirit and to the name “Metuchen” which is a Lenne Lanape word meaning “land of firewood”. The crowned letter “M” in the lower right is a reference to St. John Paul II who, as pope, founded the diocese and whose arms depicted a letter “M” in the lower right corner. With the crown it is also a symbol of the Queenship of Mary, the patroness of the diocese. Originally the “M” was also black but when the late Bishop Vincent Breen asked me to undertake a redesign of the diocesan arms in 1998 the “M” was changed to blue along with the cross.

Bishop Checchio commissioned the Italian artist Renato Poletti to work with him on his personal arms and emblazon them marshaled to those of the diocese. The gold escallop shell is a reference to his baptismal patron, St. James the Greater and the silver crescent represents Our Lady under the titles of the Immaculate Conception the patroness of the cathedral of his native diocese of Camden, as well as of the Pontifical North American College and the United States of America. The chevron represents a roof beam and, as such, symbolizes protecting the flock which is the task of a bishop. The sheep and crook are an allusion to his work as rector of a seminary preparing men to be shepherds in priestly ministry.

The motto reads, “Let Us Be Reconciled to God” a fitting message for a bishop appointed during the Jubilee Year of Mercy.

There were three popes in the 20th C. who had served as Patriarch of Venice prior to their election to the papacy. (and two were also later canonized!) They each decided to retain a chief “of Venice” (with the winged lion of St. Mark, a symbol of Venice) in their papal coats of arms. The three were St. Pius X, St. John XXIII and Pope John Paul I. 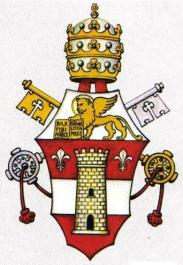 As he ends his tenure as Apostolic Nuncio to the United States of America we say farewell and THANK YOU to the Most Reverend Carlo Maria Viganó as he begins his well-earned retirement. By his manner and quiet diplomacy he has shone that, indeed, he does know Him in whom he has believed.