On February 11 the Most Rev. (John) Gregory Kelly was ordained as Auxiliary Bishop of Dallas. The description of the coat of arms (from the diocesan website):

“Bishop Kelly’s arms are based on the Kelly family design where the shield is silver (white) and the charges are black. For difference, and for his deep devotion to the Blessed Virgin Mary, the chevron is now blue. The chevron is reminiscent of the mountains of Colorado, so dear to His Excellency’s youth and the chevron is charged with two estoiles (special, six pointed stars) that are taken from the mantle of the image of Our Lady of Guadalupe to remind all of the profound Hispanic influence in Texas, the “Lone Star State“, represented by the single star below the chevron. Above the chevron are a fleur-de-lis and a trefoil (the heraldic representation of a shamrock) to honor the Bishop’s Irish and French-Canadian heritage.”

Once again we see here an example of the increasingly popular (and completely WRONG!) trend of personalizing one of the external ornaments, in this case, with the addition of the triquetra on the episcopal cross (erroneously referred to as a “processional” cross in the description) to represent the Holy Trinity because it was the name of the seminary the bishop attended.

It is necessary to repeat that the only thing subject to having charges particular to the bearer is the shield. The external ornaments may NOT be personalized in a heraldic achievement of this type and all those who advocate such a practice are both incorrect and foolish! The heraldic artist is completely free, in future, to depict this bishop’s coat of arms with an episcopal cross of any shape and manner he might wish. This is what happens when armigers turn to those who do not know what they are doing for the devisal of their coats of arms. 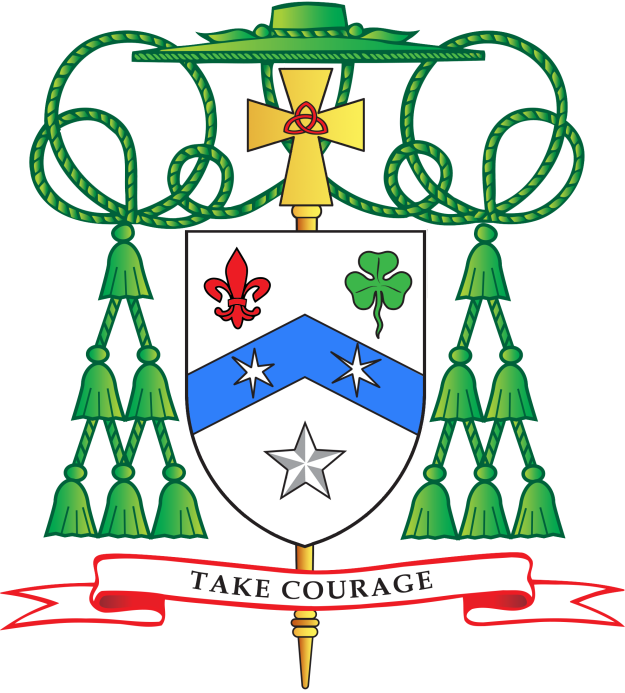 One year ago today the Very Rev. Steven A. Peay, PhD, an Episcopal priest of the Diocese of Albany and Honorary Canon Theologian for Evangelism at Christ Church Cathedral in Eau Claire, WI became the 20th Dean and President of Nashotah House Seminary in Nashotah, WI.

His coat of arms is pictured below. The blazon is:

Arms impaled; to dexter, quarterly Gules and Azure, overall on a Latin cross Or between two fountains in chief a triple blossom lily Proper; to sinister Or between three pommes a fess dancetty Gules. The shield is ensigned with the ecclesiastical hat of an Honorary Canon according to the Earl Marshal’s Warrant for the coats of arms of clergy in the Anglican Communion of 1976. Below the shield is a scroll with the motto, “Quomodo Prædicabunt Nisi Misit” (Romans 10:15)

In the arms of the seminary the lily represents both the Holy Trinity and the Blessed Virgin Mary, to whom the main chapel is dedicated. The two fountains allude to the seminary location between Upper and Lower Nashotah Lakes.

In the personal coat of arms of Fr. Peay the gold field and fess dancetty are taken from the coat of arms of Bl. John Henry Cardinal Newman. The bearer has long been an admirer of Newman’s work and writings. There is some irony in choosing this as Newman famously converted from the Church of England to Roman Catholicism and Fr. Peay, conversely, had been a Roman Catholic and was received into The Episcopal Church. Whereas Newman had three hearts surrounding the fess in his arms here, for difference, they have been changed to three pommes. In heraldry this term describes a green roundel. In this case they are chosen to resemble peas as an allusion to the bearer’s surname “Peay”.

The motto is a favorite scriptural quote that reflects the bearers long time teaching of historical theology and preaching to seminarians.