(Sir) John Ribat, MSC, KBE currently the Archbishop of Port Moresby, Papua New Guinea, will be elevated to the Sacred Purple and created Cardinal of the Holy Roman Church on November 19, 2016. We’re not concerned with his coat of arms as they would have appeared upon his ordination to the episcopacy as Auxiliary Bishop of Bereina, PNG in 2001. Rather, since 2008 when he succeeded as Archbishop of Port Moresby he has born the arms:

Quartered; 1) Argent, the Sacred Heart of Jesus enflamed superimposed on the Greek letters Chi and Rho all Gules, 2) Azure, the monogram of Our Lady Or, 3) Azure an open book Or the pages charged with the Greek letters Alpha and Omega Gules, 4) Argent, a branch of betel nut Proper.

These arms had been rendered for him by Renato Poletti, a Roman lawyer who, like many amateur heraldic enthusiasts, dabbles in heraldic design and produces his artwork on computer. He took it upon himself, unsolicited, to produce a new rendering of the Cardinal-designate’s coat of arms with the external ornaments of a Cardinal (above). However, Archbishop Ribat had already been contacted by Mr. Richard d’Apice of the Australian Heraldry Society to discuss a re-working of the emblazonment of his arms to reflect his new honor. Such projects have frequently been undertaken by Mr. d’Apice before as well as the designs of new coats of arms for many prelates and laypeople in his own Australia. Mr. d’Apice, as he often does, consulted with me to seek some advice and input.

While I do not particularly like the design of the arms I advised that it would be best at this point for a man who has been a bishop for fifteen years and an archbishop for eight to retain the arms he has been using. The deplorable habit so many bishops have today of completely redesigning their coats of arms every time they move or are promoted is to be avoided at all costs, even at the cost of maintaining a coat of arms of an inferior design. Simply to change one’s personal arms because there has been a change in office or rank goes against the whole point of heraldry as a mark of personal identification. While external ornaments correctly change to indicate a change in rank and personal arms may be marshaled with other coats of arms simply deciding after several years that one would like to adopt a different coat of arms is, in a word, wrong.

However, it is often the case that a different artist can emblazon a coat of arms in a manner that will make it both aesthetically more pleasing as well as heraldically more bearable (pun intended). This is the case with the arms of Cardinal Ribat. Mr. d’Apice and I agreed that perhaps the best thing we could do was to advise His soon-to-be Eminence to have the arms rendered by the artist with whom we usually work, Mr. Sandy Turnbull, also a member of the Australian Heraldry Society who also works in computer generated artwork. The result of Mr. Turnbull’s efforts may be seen below. 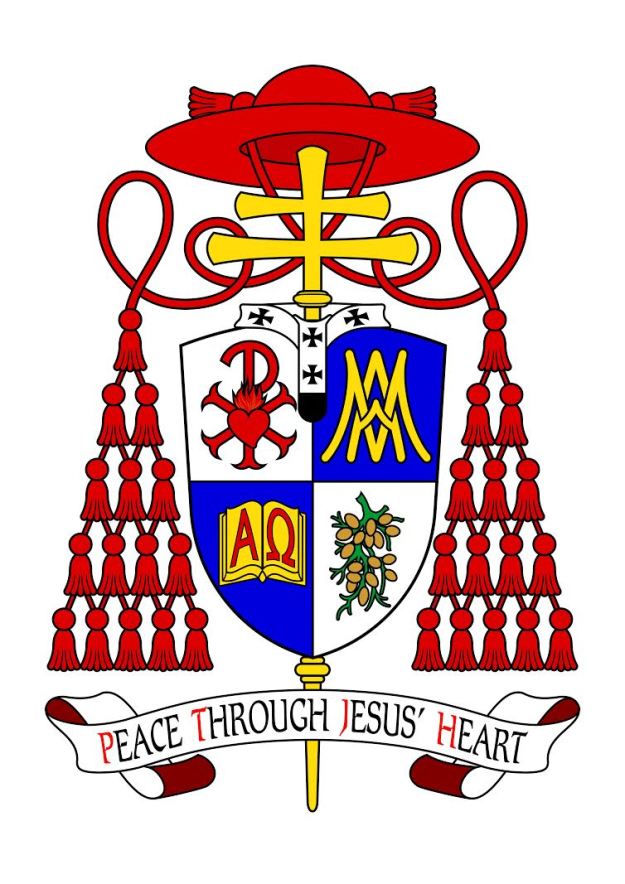 The overall shape of the achievement and the rendering of the charges, in particular the fact that they fill the field in each quarter better, as well as the depiction of the branch of betel nut are definitely an improvement. The placement of the pallium (which, for the record, I oppose in any heraldic achievement) is also better. In addition, the color palette and vibrancy of the colors is, in my opinion, also superior. The Cardinal-designate was so pleased that he communicated to Mr. d’Apice through his Vicar General that Mr. Turnbull’s rendering will be used, in particular, on his letterhead and official documents. It is indeed difficult to make a silk purse out of a sow’s ear but, on occasion, the solution to what to do about a less than happy heraldic design is simply to emblazon the arms in a better fashion.

In the past I have highlighted some of the coats of arms of members of the College of Cardinals who had come from some of the great noble families of Europe. Unlike the Cardinals of today, almost all of whom simply assume a coat of arms on becoming a bishop, many Cardinals from an earlier time came from armigerous families and the arms they bore as Cardinals were composed of coats of arms they had inherited. Here are just a few (all rendered by the late Michael McCarthy).

With the death of King Bhumibol of Thailand, who was the world’s longest reigning monarch at the time of his death, the country enters into a period of mourning under a regent until the accession of Crown Prince Maha Vajiralongkorn. According to Thai law Prem Tinsulanonda, President of the Privy Council, assumes the regency until the accession of the new king.

While the former Kingdom of Siam made use of an emblem a bit more similar to the western idea of a coat of arms the current royal emblem or “arms”, which appears on the yellow royal standard, is the Buddhist Garuda.

Appearing in the Hindu epic, the Ramayana, Garuda is the mystical firebird who serves as the mount of the god Vishnu. Garuda appears as the coat of arms of the Republic of Indonesia as well as the royal emblem of the Kingdom of Thailand. 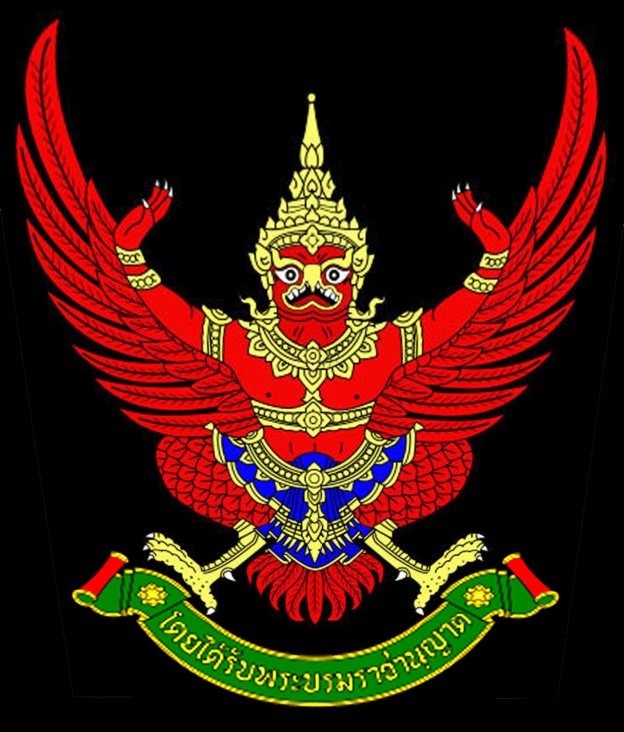