King Constantine II, the last King of the Hellenes from March, 1964-June, 1973 and Head of the House of Glücksburg-Greece passed away today. May he rest in peace.

His sister is Sofia, the former Queen of Spain and King Charles III of the UK is his second cousin. Constantine was also the Prince of Wales’ godfather.

The royal arms of the Kingdom of Greece consists of the royal arms of Denmark on an escutcheon over the arms of Greece (Azure, a Greek cross throughout Argent). The Greek royal house is a scion of the House of Glucksburg (Schleswig-Holstein-Sonderburg-Glucksburg) which is the ruling house of Denmark.

His Eminence, George Cardinal Pell has passed away in Rome due to complications during hip replacement surgery. He was 81. May he rest in peace.

The armorial bearings of the Reverend Father James R. Smith of the Diocese of Trenton, New Jersey were designed by me and recently assumed by the priest.

The shield is divided by a vertical line with the left side colored blue and the right side colored gold (yellow). These colors are borrowed from the armorial bearings of the Diocese of Trenton where he serves as a priest. Upon this is an escallop shell, a symbol of St. James the Greater which is also divided by the same colors alternating in a manner known as “counterchanging”. The counterchanging is evocative of the conversion inherent in metanoia. The shell is charged with a heart that is a symbol of St. Vincent de Paul, the “apostle of charity”. The heart is similarly counterchanged as a further allusion to metanoia.

The upper third of the shield, called a “chief” is separated from the rest by a jagged division line suggesting the teeth of a saw because St. James the Less was martyred by being sawed in half. Then the two sides of the chief are also “counterchanged” from the field below.

On the chief to the right is a silver (white) crescent moon which is a symbol of Our Lady so it alludes to the diocese of Trenton, St. Mary’s Seminary, Baltimore and the USA of whom Our Lady of the Immaculate Conception is the patroness. To the left, the violet (depicted in a stylized way) is the State flower of New Jersey. The armiger is a proud New Jerseyan.

The motto, “Go Teach All nations” is taken from the Sacred Scriptures from Matthew 28:19.

The whole achievement, instead of using the secular helm, mantle and crest is ensigned with the traditional galero, an ecclesiastical hat. It is black with one tassel pendant on either side of the shield as befits the priestly dignity.

Some armorial devices that are somewhat related to Thanksgiving include:

I’ve have once again come across several images of the coats of arms of Deacons in the Roman Catholic Church on the internet which moves me to write, yet again, that:

THERE IS NO OFFICIALLY SANCTIONED EXTERNAL HERALDIC ORNAMENT TO ENSIGN THE ARMORIAL BEARINGS OF DEACONS IN THE LATIN RITE ROMAN CATHOLIC CHURCH.

One simply does NOT exist. None, nada, zilch, zip, bupkus. Anyone who asserts otherwise is a liar and should be horse whipped (with a horse whip).

In the Roman Catholic Church there are two types of Deacons. Transitional Deacons are ordained to that lowest rank in Holy Orders as a final step prior to their Presbyteral ordination. There are also those who are called to enter into ordained ministry as Deacons with the intent of remaining so permanently. For neither type is there an external heraldic ornament sanctioned by the Holy See, which is the only authority within the Catholic Church capable of making such a determination and assigning such an ornament.

Some of you are perhaps saying to yourselves, “No, hang on, Father, that’s not so. Deacons use a black galero that has no tassels on it.” Now, I want you to read the next sentence carefully.

That has no effect on Roman Catholic Church heraldry.

Again, there is NO approved external ornament for Deacons in the Roman Catholic Church. Those who adopt the galero with no tassels are incorrect because it is an Anglican custom. Those who simply decide to make up out of whole cloth some other external ornament to function as a “Deacon’s crest” or to add a special augmentation to the shield of the arms of a Deacon like a chief indicating diaconal ministry are also quite wrong to do so. Those who claim such things are sanctioned by the Holy See are lying. Full stop.

So, what option is there for a Deacon? Well, for Transitional Deacons (a state which usually last no more than 12 months) they should wait until they are ordained Priest and ensign their arms with a Priest’s galero. For Permanent Deacons they have the option of using arms ensigned with helm, mantle and crest as laymen do (which is appropriate if they have descendants who will inherit the arms some day) or they may bear arms consisting of the shield and motto alone without any other ornament.

A coat of arms is a mark of identification not a perk to indicate your job or function. The Church has said very little on heraldry for clergy below the rank of Bishop and most of what we have by way of “rules” for the lower clergy comes from immemorial custom. Because the Permanent Diaconate was dormant for several centuries, including those centuries when heraldry developed, there are no customs for the arms of Permanent Deacons. It is hoped that the Holy See will address this at some point but until it does

DEACONS HAVE NO EXTERNAL ORNAMENT PROPER TO THEM IN ROMAN CATHOLIC HERALDRY!!!!

In January several new Auxiliary Bishops have been ordained in the USA. Their choices regarding armorial bearings have been, shall we say, underwhelming. I am not commenting on the quality of the artwork, at least not for the moment. This post is concerned with the content and composition of these coats of arms from a heraldically correct viewpoint. Let’s have a look. 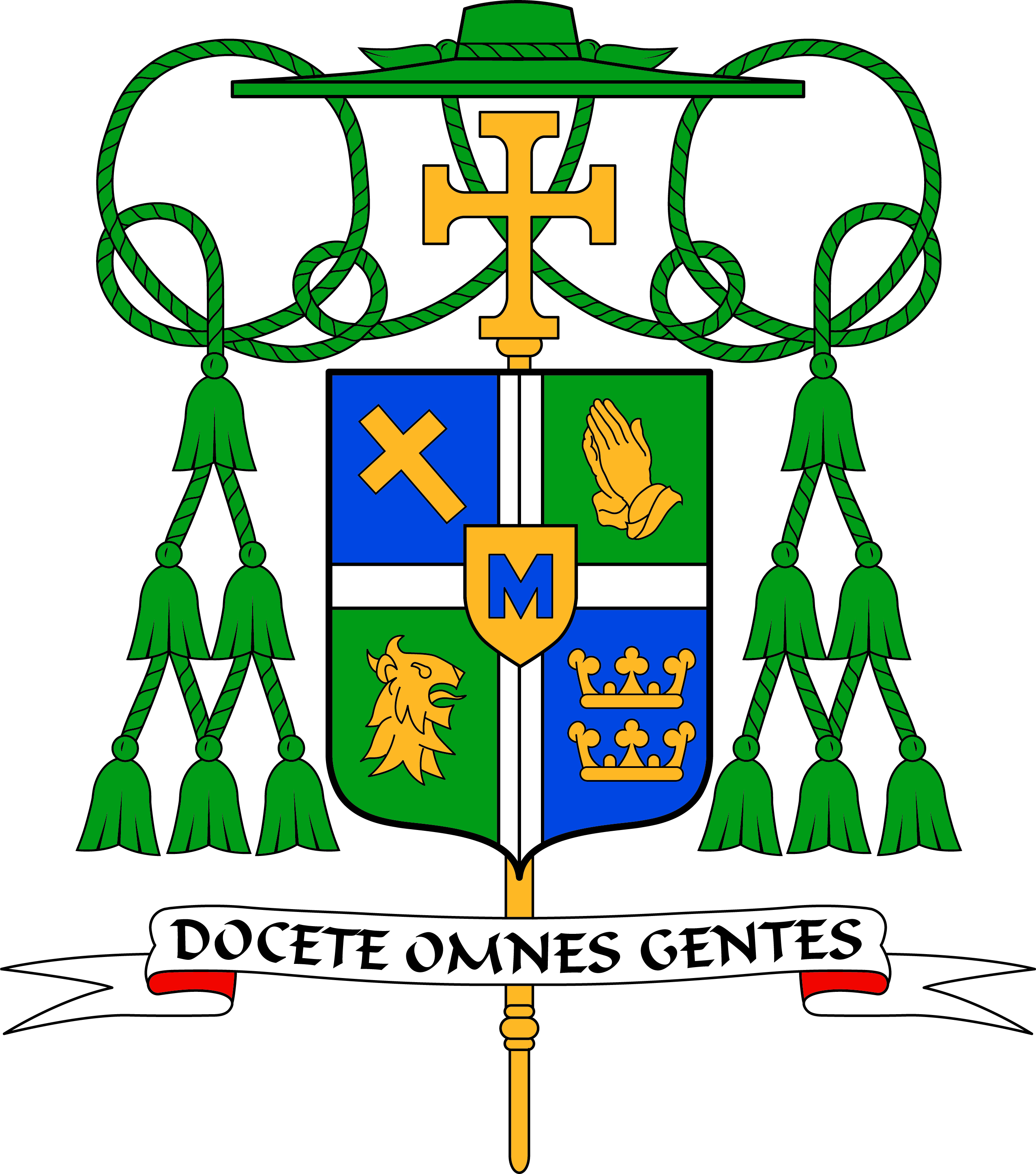 Gag. (and not entitled to the quarter of the Order of the Holy Sepulcher) 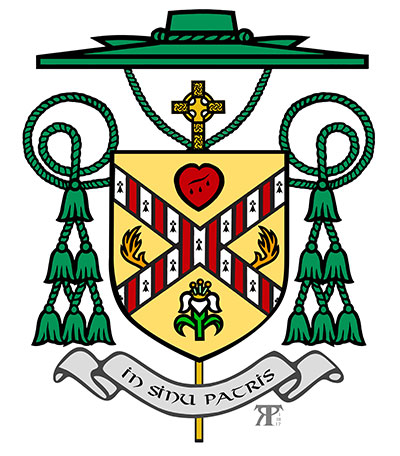 Here is a a coat of arms recently devised by a friend for St. Nicholas

Here is another said to be of “Father Christmas”

The Three Wise Men (or Kings)

A coat of arms attributed to the Mother of Jesus, Mary 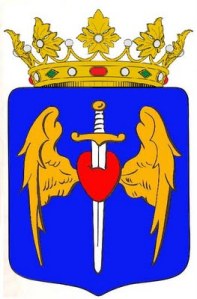 Jesus (you know…the One whose birthday we’re celebrating?)

This is just one of many different attributed arms for Jesus, the Christ depicting the implements of His passion.

A wonderful Christmas scene showing all the principal armigerous figures of the story of the Nativity with their corresponding attributed arms. (by daSilva) 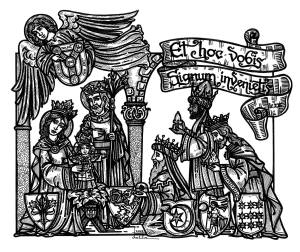 His Eminence Edmund Cardinal Szoka, a priest of Marquette Michigan, Former Bishop of Gaylord, Michigan, Former Archbishop of Detroit, Michigan, Cardinal Priest of Sant’Andrea e Gregorio al Monte Celio, Former President of the Prefecture for the Economic Affairs of the Holy See, Former President of the Pontifical Commission for the Vatican City-State and President-Emeritus of the Governorate of the Vatican City-State has passed away. His coat of arms underwent several changes as he moved from Gaylord, to Detroit to the Holy See. The last version of his arms is below. May he rest in peace. 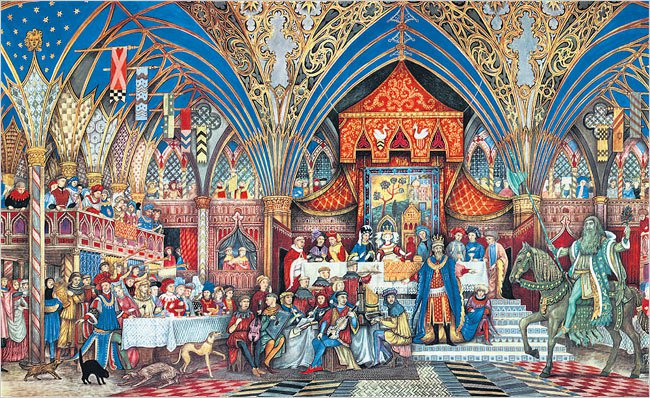 So, why am I betting (read: hoping) that the third time is a charm? Because this time I’ve decided to do a blog that I think will be more manageable. It’s about heraldry. The overriding passion, avocation really, of my life has been my abiding and ever-deepening interest in heraldry in general and ecclesiastical heraldry in particular. So, this blog is about just that: heraldry. Because that is a topic that elicits every reaction from enthusiastic agreement to mild amusement to searching for the quickest exit without making any sharp or jerking movements from those with whom I share it I know that it is never going to become anyone’s “go to” blog for anything. In addition, its not like heraldry has got breaking stories every hour of the day so there will be no need for me to attend to it all the time.

Oh! And for those wondering about the name. It is “heraldry” in one of the many translations into Latin that are considered acceptable.