On September 27, 1997 I was ordained a priest. This year marks the 20th anniversary not only of my sacerdotal ordination but also of that moment when, being a priest, I assumed a coat of arms. I had been designing, tweaking and modifying a design of my own coat of arms since i first began to settle on a design of my own in 1984. But, the various versions of a coat of arms that I had, which consisted of simply a shield and motto with no other external ornaments, was never really “used” by me. In other words, I hadn’t put it on anything or made any kind of public use of it.

This was for two reasons. First, I knew it was still a work in progress. It would take me from 1984 and that initial, rather poor, design all the way until 1992 until I was truly satisfied with the design of my coat of arms. Second, I didn’t want to adopt the arms with the usual external ornaments of helm, mantling and crest only to exchange them for a priest’s galero when the day came. I preferred to wait until I was entitled to use the galero, so I waited until ordination.

Shortly after my bishop called me in to tell me that my ordination had been decided for certain (8 months earlier than anticipated , as it turns out) I contacted the late Richard Crossett, an American heraldic artist of great talent. He got to work right away in late July, 1997 and I had the finished artwork by late August in plenty of time for my Sept. 27th ordination. His artwork was used for the program cover at my First Mass and I also registered the arms with the American College of Heraldry on whose Board I now happily serve. The blazon is: “Or, a Greek cross fleury Gules; a chief sapiné Vert“.

I always liked Mr. crossest’s interpretation of my coat of arms. I’ve been fortunate to have a couple of dozen renderings of my coat of arms done over the years but I’ve always considered this one to be special. I don’t have an “official” version of my arms since they are assumed, not granted as is perfectly acceptable and is, indeed, the norm in the context of being an American. Nevertheless, this is what I consider to be the closest thing to an official version of my personal arms, primarily because it was the first time I had them rendered by someone other than myself and because it was done in conjunction with my ordination. This coat of arms was one of the ways I marked becoming a priest.

Twenty years later that motto is still my daily prayer: “Guide Me, Lord”.

On September 23rd the Most Rev. Claudio Palumbo (52) was installed as the 44th bishop of Trivento, Italy.

The coat of arms of the Most Rev. Christophe Pierre, Titular Archbishop of Gunela, a Frenchman from Rennes who currently serves as Apostolic Nuncio to the United States of America, can be seen below: 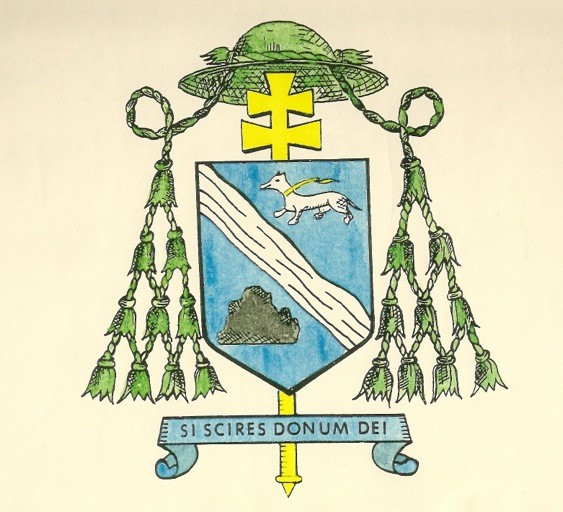 The motto chosen for the Coat of Arms is Si Scires Donum Dei (“If you knew the gift of God” – John 4:10). A woman of Samaria was sitting by the well when Jesus asked her for a drink of water … “Jesus answered her, if you knew the gift of God and who it is that is saying to you, ‘Give me a drink,’ you would have asked Him, and He would have given you living water.” John 4:10
The white animal is an ermine “passant argent gorged or and lampassed gules” as represented in the Coat of Arms of Saint-Malo, the Archbishop’s home town. The legend says that the ermine would rather die than to have her white fur stained.
The rock represents the granite rocks of Brittany. It is strong enough to resist the constant assaults of the sea. It is therefore a symbol of solidity. The surname of the Archbishop, “Pierre”, is the French translation of rock or stone. The Archbishop has also received the mission to represent the Successor of the first Pope, named by Jesus as Cephas (rock or stone).
The river crossing the shield represents the water the woman of Samaria was looking at (the well of Jacob) when Jesus offered to give her living water. It represents also the river which St. Christopher (“Christ-bearer”) was helping people to cross over. Once, a child on his shoulders became suddenly heavy and was revealed to him as being Jesus himself.
The Coat of Arms was designed by Xavier Pierre, a younger brother of the Archbishop. He passed away in 1999.

Two bishops were recently ordained and installed as Diocesan bishops in the United States and some have asked for my comment on their coats of arms. 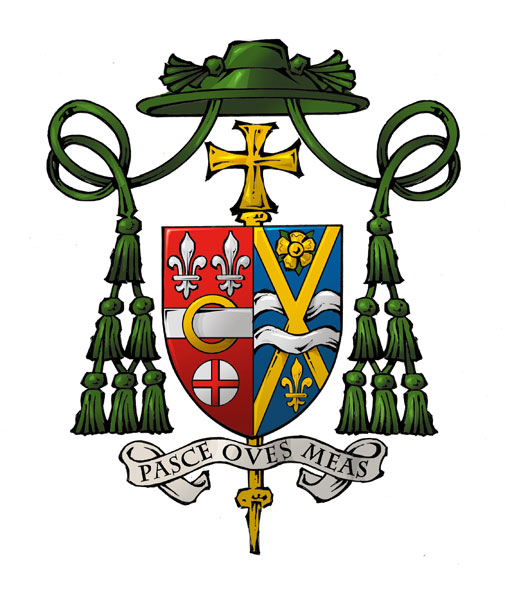 His Eminence, Cormac Cardinal Murphy-O’Connor, 10th Archbishop of Westminster died today in the UK after a battle with cancer. He was 85.

He became the 10th Archbishop of Westminster in March 2000 and “de facto” the leader of the Roman Catholic Church in England and Wales. Cardinal Murphy-O’Connor retired from the role in 2009 and was the first archbishop to do so. Born on 24 August 1932 in Reading, Berkshire, Cardinal Murphy-O’Connor was one of six children. Two of his brothers became priests while another played rugby for Ireland. He was ordained priest in Rome in October 1956 and was made Cardinal-Priest in the title of Santa Maria Sopra Minerva in 2001 by Pope John Paul II.

His coat of arms (above) was originally designed by the late Bruno Heim when Murphy-O’Connor was named Bishop of Arundel & Brighton in 1977. Later they were impaled with a modified version of the arms of the See of Westminster as recorded at HM College of Arms in London.

May he rest in peace.