Here is a a coat of arms recently devised by a friend for St. Nicholas 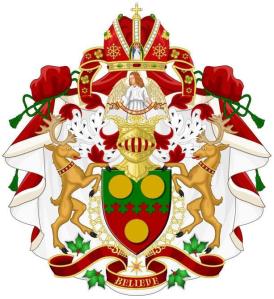 Here is another said to be of “Father Christmas”

The Three Wise Men (or Kings)

A coat of arms attributed to the Mother of Jesus, Mary

Jesus (you know…the One whose birthday we’re celebrating?)

This is just one of many different attributed arms for Jesus, the Christ depicting the implements of His passion.

A wonderful Christmas scene showing all the principal armigerous figures of the story of the Nativity with their corresponding attributed arms. (by daSilva)