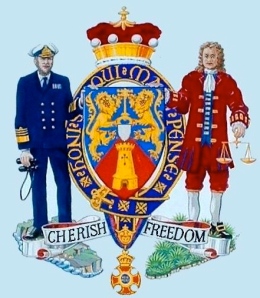 The coat of arms of the late Baroness Thatcher. This version was done when she was made a Dame of the Garter. While the arms of women are usually depicted on an oval or lozenge shaped shield these are done on the heater shaped shield usually used by men. The  inescutcheon (small plain shield in the center) is placed there to indicate these are not her husband’s arms or inherited from an armigerous ancestor but are, in fact, her own granted coat of arms.

UPDATE: Her husband’s arms which are completely different appear below.