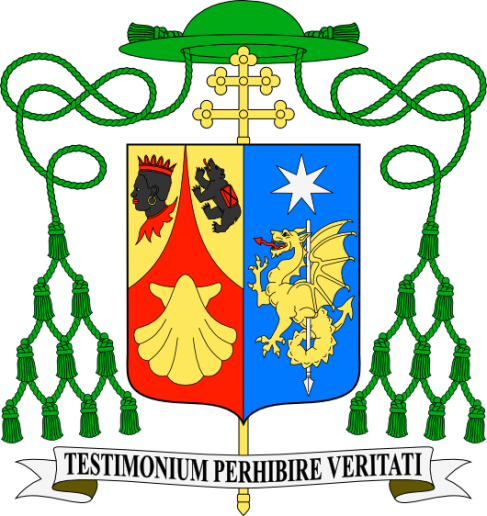 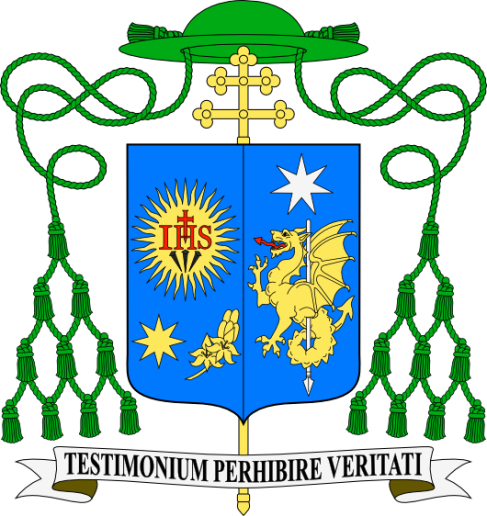 Having seen a Facebook post I wrote about this some time ago my friend and heraldic enthusiast and artist Xavi Garcia who writes the excellent blog Dibujo Heráldico posted recently about the coat of arms of the Prefect of the Pontifical Household (and former secretary to Pope Benedict XVI) Archbishop Georg Gänswein. It is the custom of the Prefect of the Pontifical Household to impale (combine on the same shield) his personal arms with those of the reigning pope. When Archbishop Gänswein was named an archbishop earlier this year he adopted personal arms that reflect St. George, his baptismal patron (the dragon being slain with a spear) and his devotion to Our Lady (the star). These were impaled with the arms of Pope Benedict (above). Now that Pope Francis has been elected and Archbishop Gänswein remains as Prefect of the Pontifical Household (at least for now) his arms are changed to be impaled with those of Pope Francis (below). Now there is a great deal of blue on one shield but that was not something that could have been forseen. Xavi has depicted the two coats of arms himself in his own style and I am happy to share them with you here. Check out his blog while you’re at it too!

Anyone interested seriously in the art of heraldry should, indeed must, become familiar with the work of artist Paul Boesch. He had a distinctive style drawing such that his pieces looked like wood cuts. The illustration above is a beautiful rendering Boesch did of the coat of arms of Pope Pius XI (1922-1939). 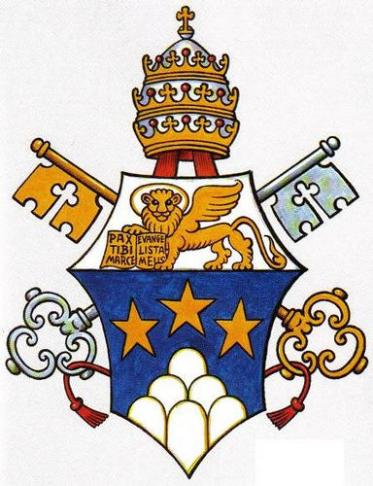 Arguably one of the best coats of arms designed and emblazoned by the late Archbishop Bruno Heim was that of Pope John Paul I who reigned as pope for just 33 days from August to September of 1978. The coat of arms was slightly modified from the one he had borne before becoming pope. Upon his election Albino Cardinal Luciani chose the unique double name of John Paul combining the papal names of his two immediate predecessors. The coat of arms was put together to reflect this double name. In chief we see the lion of St. Mark that makes up the arms of the See of Venice. Cardinal Luciani served as Patriarch of Venice before being elected to the papacy. In addition, two of his predecessors as pope, St. Pius X and Bl. John XXIII also were Patriarchs of Venice before their respective elections as pope and both retained the chief of St. Mark in their coats of arms as pope. In the arms of John Paul I the chief of St. Mark not only recalls his own time in Venice but evokes the memory of Pope John XXIII. The collee, or stylized mountains or hillocks in base are from the coat of arms of Pope Paul VI whose family name, Montini, means “little mountains”. In between the mountains and the chief there are three stars. Paul VI had three fleur-de-lis in the same position in his arms and Cardinal Luciani’s original arms had three stars but the stars had only four points each. Here they have been modified to five-pointed stars which are a heraldic symbol of Our Lady, specifically of the Assumption. Despite the fact that Pope John Paul I adamantly refused to be crowned as pope the papal tiara nevertheless appears in its usual spot ensigning the shield along with the keys of St. Peter. Truly, this is one of Heim’s best designs. Sadly, it was not seen by many because of the brevity of the pontificate of the “smiling pope”. 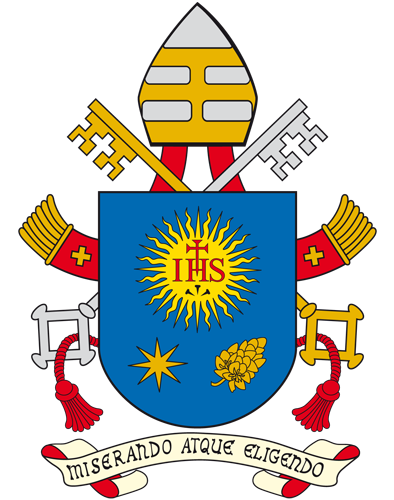 OK, let’s get this over with. A blog about heraldry and especially Catholic heraldry has to say something about the newly adopted arms of the newly elected pope. Let’s begin with the shield. It’s never a good idea for any prelate who is also a Religious to use the insignia of his Order because it implies he has jurisdiction over the entire Order or that he possesses the entire Order. I suppose in the case of a pope it could be argued that he has jurisdiction over it. Nevertheless, all the examples of popes who have used the arms of their Order in their own arms are examples of poor heraldry. Pope Francis’ arms are no exception. In this case, as it is also a symbol for Jesus within the Holy Family it is understandable why it is being used as a charge but no less excusable. The change of the star from 5-pointed to 8-pointed is nice as is the clarification of the “flower of nard” so that it no longer resembles a bunch of grapes!

While I understand placing the three charges together was an allusion to the Holy Family (Jesus, Mary and Joseph) it shows, nonetheless, poor composition simply to slap three charges onto the shield. Creating a greater unity by changing the star and nard-flower from their original silver to gold was, in my opinion, a good move. However, it would have been better to separate the Jesuit sun-burst from the other charges. Perhaps the shield could have been parted per fess Azure and Argent? The charges could have remained in their present positions but depicted as counter-changed. Thus a white sunburst on a blue field (sufficiently differencing the sunburst from the Jesuit arms) and the other two charges in blue on a white field. This would also have employed the colors of the flag of Argentina as a subtle reference to the homeland of the first South American pope.

The external ornaments seem fine. I was happy to see the ill-placed pallium included in the arms of the last pope was not repeated. The inclusion of the motto is a bit of an innovation. All popes have had mottoes but they are not usually depicted in the achievement. It must be noted that external ornaments CANNOT BE MANDATED by a blazon so the motto on the scroll is not essential when the arms are displayed and it may be left out. The keys and cord are complete copies of the ones first designed by the late (great) Archbishop Bruno B. Heim for the arms of Bl. John Paul II. The tiara-mitre hybrid first poorly conceived by Cardinal di Montezemolo for the arms of Benedict XVI is, predictably, repeated here. It’s still an allusion to the tiara (i.e. a stylized form of the tiara) and, as such, is not essential in its present form. See my comment above about external ornaments.

I’m glad to see the pope didn’t feel the need to completely overhaul the arms he had first assumed as a bishop when later he became pope. The artwork is decent although it could probably be depicted far better by a more experienced artist. The general shape of the achievement is good and, all things considered, this is not a horrible coat of arms.