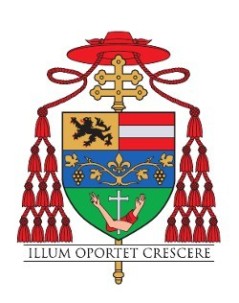 The arms also illustrate that the method of marshaling coats of arms preferred in many places, impalement, is far from the only option. The ancient arms of the See of Salzburg make up the upper third of the shield. The center section of blue with the gold grapevine is primarily emblematic of those referred to in Jn 15:1-5 the Lord’s vineyard and the strong connection between Christ and the believer (“I am the vine; you are the branches.”) . At the same time the vine but is also reference to the origin of Dr. Lackner from the wine area , namely that of Eastern Styria around Kapfenstein and St. Anna am Aigen. The golden heraldic lily is the actual symbol for Mary. The threefold division of the fleur-de-lis symbolizes the Holy Trinity of the Father, the Son and the Holy Spirit. The green base shows the “Franciscan Conformities” or the coat of arms of the Franciscan Order (without the clouds).

2 thoughts on “New Archbishop of Salzburg”