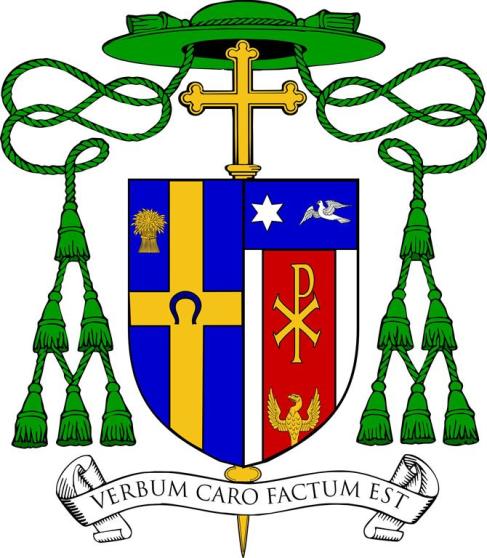 The colors of the arms of the diocese of Fargo, Or and Azure, are traditionally used to allude to the Virgin Mary, who is invoked as patron of the diocese under the title of her Immaculate Conception. In the center of the Cross is a horseshoe, alluding to William George Fargo (1818–81), the namesake of the See city and co-founder of Wells Fargo & Co. In dexter chief (upper left) is a garb of wheat which recalls the important agricultural product of North Dakota, as well as the bread that becomes the Body of Christ in the celebration of the Eucharist.

The arms of Bishop Folda utilize the colors and general design of the arms of the Diocese of Lincoln, Nebraska for which the bishop was ordained a priest in 1989. In the blue chief is a star to represent Our Lady. Next to the star is a dove, a symbol of the Holy Spirit and an attribute of Saint Gregory the Great, the pope and doctor of the Church, who is often depicted with the dove hovering at his ear as he writes. Bishop Folda served as Rector of Saint Gregory the Great Seminary in Seward, Nebraska, from 1999 to 2013. On the red pale is a Chi-Rho, the ancient monogram for Our Lord composed of the first two Greek letters in the name Christ. Rising from the base of the shield is an eagle, which has been used from ancient times to allude to St. John the Evangelist, Bishop Folda’s baptismal patron.

Bishop Folda will be ordained and installed in Fargo on June 18, 2013.

Not thrilling, but nice.