On Tuesday, July 24, the Most Rev. Richard G. Henning (53), a priest of Long Island’s Diocese of Rockville Centre and currently Rector of the Seminary of the Immaculate Conception, will be ordained a bishop and become Titular Bishop of Tabla and Auxiliary Bishop of Rockville Centre. Shortly after his appointment he asked me to assist in the design of his arms. The Bishop and I are classmates from our days attending Chaminade High School in Mineola, NY. His coat of arms is: 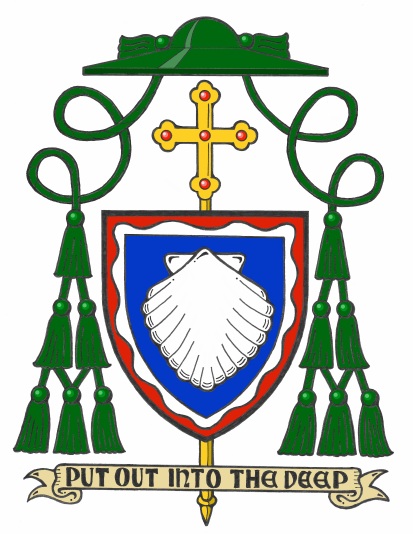 The blazon of the arms is: Azure, within a bordure parted wavy Argent and Gules an escallop shell Argent. The shield is ensigned with an episcopal cross Or charged with five jewels Gules and a bishop’s galero with cords and twelve tassels flanking the shield disposed in three rows of one, two and three all Vert. On a scroll below the shield is the motto, “Put Out Into The Deep”.

The shield is composed of a design depicted in red (Gules), white (Argent) and blue (Azure) which are the national colors of the United States.

Both the blue background and the single escallop shell allude to the sea as evoking the Bishop’s own background and the shell is also borrowed from the coat of arms of the See of Rockville Centre, the diocese in which he was born and raised and which he serves as a priest and bishop. The shell image also recalls the Bishop’s heritage in the Diocese of Brooklyn, dedicated to its patron, St. James. The ordination of the bishop takes place on the eve of the Feast of St. James. In concert with the Bishop’s motto, the shell is a traditional symbol of baptism and pilgrimage. It is in the depths of these waters that Christians find their salvation in Jesus Christ.

The white wavy line surrounding the blue field is similarly taken from the arms of Rockville Centre and it alludes to the diocese’s location on Long Island, NY. Furthermore, it indicates the sea as the place where the barque of St. Peter, an image used to evoke the Church, is located.

The blue background also evokes the Bishop’s devotion to the Blessed Virgin Mary and his years of service as a Professor and Rector at the Seminary of the Immaculate Conception. The red wavy portion of the border evokes the Bishop’s devotion to the Most Sacred Heart of Jesus and his service as the Director of the Sacred Heart Institute for the Ongoing Formation of the Catholic Clergy.

The external ornaments include a gold episcopal cross placed vertically behind the shield decorated with five red jewels symbolic of the wounds of Christ. This is often mistaken for a processional cross like the one used in liturgical processions. However, like other heraldic ornaments the episcopal cross has its origins in something which is no longer actually used. At one time all bishops had, in addition to the processional cross at the head of the procession, another cross carried directly in front of them by a cleric. This other cross was a sign of the office of bishop. While no longer actually used it has remained a symbol of the episcopal office in heraldry.

Similarly, the broad-brimmed green galero was, at one time, worn by bishops in outdoor processions and cavalcades. No longer used it remains a heraldic symbol of the office of bishop and takes the place of the helmet, mantling and crest that would appear in the coat of arms of a layman. In Catholic heraldry the color and number of tassels on the galero indicates the rank of the bearer. The single barred episcopal cross and the green galero with twelve tassels signifies the coat of arms of a bishop according to the Instruction of the Holy See, “Ut Sive” issued in 1969.

The motto chosen by Bishop Henning appears on a scroll below the shield. “Put Out Into The Deep” which is taken from Luke 5:4.