On Wednesday, January 4, 2017 the Most Rev. Gregory Parkes a 52-year-old Long Island native who has, since 2012 served as Bishop of Pensacola-Tallahassee, Florida will be installed as the fifth bishop of St. Petersburg, Florida.

At the time he was ordained a bishop and installed as the fifth bishop of Pensacola-Tallahassee he assumed a coat of arms (below) designed for him by the well-known Italian heraldic artist, Marco Foppoli:

Since the arms of the See of Pensacola-Tallahassee, a dual diocese with co-cathedrals, is divided per fess with each of the See’s two cities occupying, as it were, a quartering of the shield the bishop assumed personal arms that were similarly divided per fess so that when impaled on the same shield the overall effect suggests a quartered shield with a rather pleasing effect.

Upon his translation to the See of St. Petersburg the bishop had his arms rendered by a different artist and, according to the usual North American custom, impaled his arms with those of the very nicely designed and handsome arms of the See: 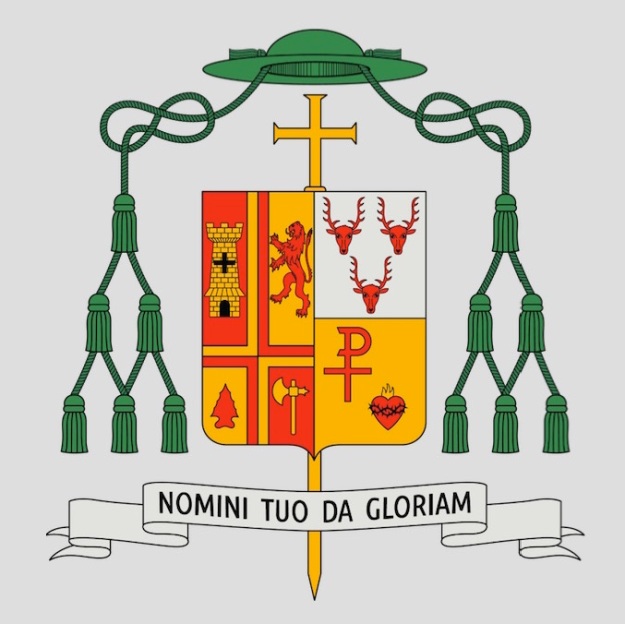 However, we can now see that the bishop has decided to change his personal arms. Firstly, he has decided to add the charge of the Sacred Heart of Jesus in base as an allusion to the coat of arms of his former diocese, Pensacola-Tallahassee. This is not wholly a horrible idea. Rather, it serves almost as a kind of augmentation. However, having said that it also feeds into a very bad habit also present among many of the American bishops today who end up serving in more than one diocese over the course of their episcopal ministry. That is, deciding to add a charge from each place where they have served as though collecting charms for a charm bracelet throughout their lives. This, too, also gets back to the poor idea of having one’s coat of arms serve as a pictorial CV…which it decidedly is not.

I don’t know for certain but the desire to include the Sacred Heart charge which is usually emblazoned as “Proper” (shown in its natural color of red) could perhaps explain the otherwise inexplicable decision to change the tinctures of the section of the bishop’s personal arms in base from “Gules a chi-rho Or” to “Or a chi-rho Gules and the Sacred Heart Proper in bend“.

I think the bishop would have ended up with something better if he had augmented his arms by placing the Sacred Heart on an escutcheon or a bezant or plate imposed over the crossing of the chi-rho or possibly by simply placing it on a canton as a genuine augmentation. In that way he could have left the original tinctures intact and avoided what he essentially has now: an entirely new coat of arms!

Again, the translation to a new diocese is not sufficient justification for redesigning and changing a coat of arms in use for four years.

It’s sad that the age of the internet has created all sorts of new opportunities for the heraldic enthusiast as well as contributed to the proliferation of newly proclaimed heraldic “experts” and yet has, ironically and somewhat paradoxically, also led to the degradation of the quality of heraldic knowledge that is prevalent among those assisting with the preparation of coats of arms, in particular in ecclesiastical circles.