On March 3, the Most Rev. Daniel Elias Garcia was ordained as Titular Bishop of Capsus and Auxiliary Bishop of Austin, Texas. His adopted coat of arms (below) depicts his devotion to Our Lady (the roses), baptism (the shell), the Colorado River and Christ who is the First and the Last.

Dividing the field into two colors (green and gold) by a blue line isn’t really the best design choice. It would have been better if the whole field were gold. In addition, the description of the arms from the ordination program describes the “processional cross” as being in the form of a Jerusalem cross for apparently no reason. First of all it is not a processional cross. The external ornament in a bishop’s coat of arms more than any other that marks it as the coat of arms of a bishop (even more than a mitre or a galero) is the episcopal cross that stands vertically behind the shield. This type of cross, which resembles a processional cross, used to be carried directly in front of a bishop. Like the galero, also no longer in use, such episcopal crosses are no longer used but are retained as not only one of but actually as THE ensign of the coat of arms of a bishop. The galero is optional; the cross isn’t.

Second, it is not permitted to mandate that an external ornament like the episcopal cross, be depicted in a certain shape or style. The blazon concerns itself only with what is on the shield. That may indeed be mandated to be depicted in a particular way. No other artist is bound to depict the episcopal cross of Bp. Garcia’s arms as a Jerusalem cross. It may be his preference but it is not one to which others must adhere. 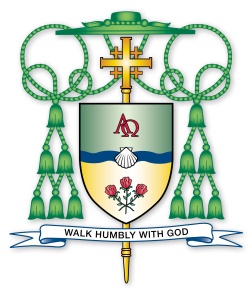