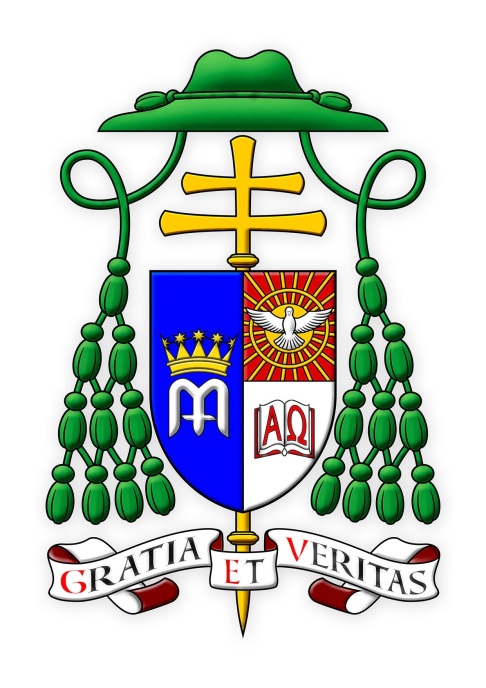 The coat of arms of the Most Rev. Julian Porteous, up until now the auxiliary bishop of Sydney, Australia who has been promoted to be the (non Metropolitan) Archbishop of Hobart, Tasmania, Australia. He will be installed on September 17th. The Archbishop decided to re-design his current coat of arms, assumed at the time he was named auxiliary bishop, to bring them into better harmony when impaled with the arms of the See of Hobart. Archbishop Julian’s original arms were: “Quarterly, Vert and Or, a cross throughout Counterchanged; in dexter chief a dove rising surrounded by a golden effulgence and in sinister base an open book Argent, bound Or charged with the Greek letters Alpha and Omega Gules”.

In the redesign he has retained the dove representing the Holy Spirit and requested in be surrounded by rays suggesting the famous Bernini window above the Altar of the Chair in St. Peter’s Basilica. In addition the open book alluding to the Sacred Scriptures has been retained. Thus showing the heraldic equivalent of Spirit and Wisdom.

The new blazon is: “Arms impaled. In the dexter Azure the letter “M” Argent crowned with a celestial crown Or (Hobart); In the sinister per fess Gules and Argent, in chief a sun in splendor, the rays of light depicted as straight lines radiating to the edge of the field, within a ring all Or, charged overall with a dove displayed affronté Argent; in base an open book Argent, bound Gules and charged on the pages with the letters alpha and omega, Gules”.

The arms were designed by me and Mr. Richard d’Apice of Australia and depicted by Mr. Sandy Turnbull, also of Australia.

5 thoughts on “Archbishop Porteous of Hobart”