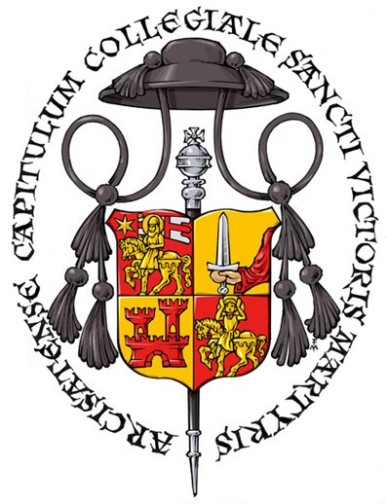 One of the lesser known and, indeed, lesser used external ornaments in ecclesiastical heraldry is the Prior’s Staff, sometimes called the Cantor’s Staff. Like the crozier of bishops and abbots it has its origin in the staff used by pilgrims as a walking stick. As it evolved it came to be depicted as a simple staff usually of metal which terminated at the top in a small ball, or an apple, a fleur-de-lis or even the small representation of a house or chapel.

It is most often used in ecclesiastical heraldry for monastics but can also be seen in those places that still have cathedral chapters. Those officials of the chapter who do not enjoy the right to pontifical insignia, such as Priors, Provosts, Precentors or Cantors make use of it as a sign of their office. At one time Precentors or First Cantors were in charge of music for the chapter and cathedral and actually used this long staff to conduct the choir. It’s easy to see how from there it became a symbol of their office. This type of staff was also used to direct ceremonies.

Using the Prior’s Staff as a heraldic emblem was for those officials who actually used one in real life. As its use became less frequent it then evolved into an emblem for those who held the office that used to employ such staves. It is seen very little in heraldry these days.

(The example above is the coat of arms of the Collegiate Chapter of Canons of St. Vittore of Arcisate rendered beautifully by Marco Foppoli)